From captured CO2 gas to a mineralized rock – the technology has been around for a couple of years now and it’s already successfully tested by Carbfix in Iceland. Cella Mineral Storage is a new startup that wants to utilize the technology of sequestering CO2 underground and transforming it into a solid form.

Founded by a team of experts in mineral carbon storage, the startup is now partnering with a geothermal power company in Kenya on a project that will aim to use renewable power to carry on the process.

As Fast Company reports, a new 140-megawatt geothermal power plant is expected to come online in the second quarter of 2023 in northern Kenya where Cella plans to begin its pilot, also at the same time.

The company wants to test new techniques like reusing salty water from the geothermal plant’s own processes and if successful, it plans to work with a direct air capture (DAC) company to launch a complete CO2 capture and sequestration project at the site late next year.

Cella has also been reported to have received funding from Frontier – an advanced market commitment that aims to expand the global supply of carbon removal. Frontier is backed by tech giants like Stripe, Alphabet, and Shopify which have committed to purchase almost $1 billion worth of CO2 removal while fostering new innovative companies that want to scale up their clean technology.

Relevant: Alphabet, Stripe And Others To Buy $925M Of Carbon Offsets

For its testing ground, Cella is eyeing Kenya’s volcanic rocks, filled with basalt that turns out is a perfect fit for the process of transforming CO2 gas into stone. The country also runs on more than 92% renewable energy, which can power the energy-intensive process of sucking CO2 from the air.

Removing CO2 from the air is now a must if the world wants to prevent climate change from getting worse. New technologies like direct air capture and permanent sequestration are attracting a lot of attention as they have the ability to tackle the issue of excess CO2 in our atmosphere and put it back where we dug it from in the first place. 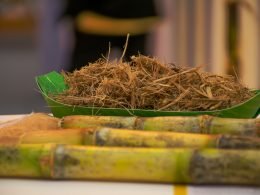