Japan’s largest power generator JERA announced plans to run one of the power station’s units on 20% zero-emissions ammonia. It is now looking for suppliers so it issues a global call to providers of green ammonia as the utility moves forward with efforts to decarbonize its massive coal generation fleet.

JERA is seeking around 500,000 tons per year of green ammonia for use in the 1,000MW Unit 4 at the Hekinan power station. The utility has sent a request for proposals to more than 30 international companies. It wants to purchase ammonia that was produced using zero emissions energy sources like renewables, or made using carbon capture and storage.

That proposal is a great opportunity for Australian ventures interested in developing green hydrogen and ammonia production facilities. Several projects are planning to do just that – the CWP and Intercontinentals 26GW Asian Renewable Energy Hub planned for Western Australia’s Pilbara region is one example. The Hub is scheduled to eventually grow to produce 10 million tons of ammonia a year after 2025.

There are a number of projects across Australia looking to play part in the green ammonia market and several Japanese consortiums are also interested in those technologies.

According to Andrew Dickson, the Development Director of CWP, JERA still needs to technically validate large-scale ammonia co-firing at the power plant that is expected to be completed by 2025. Success in this endeavor would give other coal-power generators confidence in this approach.

JERA has announced commitments to reach net zero emissions by 2050 and decommission its most inefficient coal-fired generators by 2030. “JERA will continue to contribute to energy industry decarbonization through its own proactive efforts to develop decarbonization technologies while ensuring economic rationality,” said the company in a statement.

Relevant: New Transport Corridor For Blue Ammonia To Be Built Between Norway And Rotterdam

The demand for a clean energy solution from one of the world’s largest coal-fired plants is a promising development for companies looking to participate in this market. Green ammonia and green hydrogen are expected to grow exponentially in the next few decades and demand is even projected to outrun supply. More market players interested in producing zero emissions fuels are critical for the large-scale development of the industry. 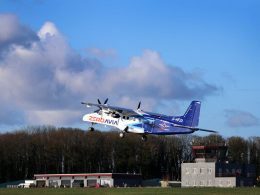