In 2013, a team of microbiologists discovered an untypical enzyme in heat-loving bacteria. The hydrogen-dependent CO2 reductase HDCR, found by a group of Goethe University Frankfurt scientists led by Professor Volker Müller, produces formic acid from H2 and CO2. In the process, the H2 moves electrons to the CO2. This makes HDCR the first known enzyme that can directly make use of H2.

“It was already clear to us after our discovery that it had to be the two small subunits that transfer the electrons from one module to the other,” said Müller. In 2016, researchers discovered that the enzyme forms long filaments. “We could see how important this structure was from the fact that filament formation massively stimulates enzyme activity.”

Nine years after the original findings, the researchers from Goethe University Frankfurt and a group led by Dr. Jan Schuller, University of Marburg, and LOEWE Centre for Synthetic Microbiology, have determined the HDCR structure at an atomic level.

The structure shows why HDCR is much more efficient than both chemical catalysts and enzymes at producing formic acid as a “liquid organic hydrogen carrier” from H2 and CO2.

The research team says that some mysteries surrounding HDCR are still unresolved. Yet, the hydrogen-dependent enzyme’s future is promising, Müller said. “Perhaps one day we’ll be able to produce synthetic nanowires which we can use to capture CO2 from the atmosphere,” he said. “We’re also a step closer now to biological hydrogen storage.”

Hydrogen is turning into one of the leading options for storing energy from renewables, and hydrogen-based fuels can transport such energy over long distances. Green hydrogen is seen as key to achieving net zero goals by 2050 because it is produced in a climate-neutral manner. The process of its production, however, can be difficult and expensive. Clean hydrogen is part of several emissions reduction pledges at the UN Climate Conference COP26. 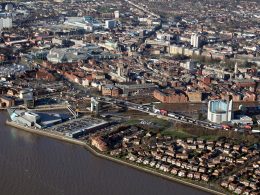