We had a chat with the carbon capture and sequestration (CCS) super developer’s CEO Brent Lewis about these new partnerships, the future of CCS and the company’s plans moving forward.

Carbon America says it can build CCUS projects up to 50% faster than other companies in the field at lower costs. How is that possible?

Well, because we’re starting smaller and not as ambitious, I think we’re trying to get a lot of learning in on the first projects. So we’re building the playbook.

We’ve got regulatory people on our team that have a deep understanding of the permitting process and how to draft monitoring, reporting and verification plans. We are designed to go faster. So we’re balance-sheeting a lot of our opportunities, meaning that rather than wait for the project finance markets to come around, our investors are supportive of us using corporate cash to move projects forward.

And we are willing to take some risks along the way, in order to move as quickly as we can. In Carbon America we are very mission driven. And that it’s a key element to us in our culture and what we’re all trying to do here.

Congratulations on the recent partnership with Sterling Ethanol and Yuma Ethanol.  Carbon capture for ethanol production and the pipelines associated with it have seen some opposition in the US – has Carbon America experienced any of it?

Our plan is just maybe a little bit different, where rather than doing large interstate projects linking dozens of carbon dioxide emitters on one single pipeline, what we’ve tried to do is target carbon capture and sequestration opportunities that are going from a source to a sink on a one-off basis, so our pipeline is not traveling very far.

So that’s it, but we know we’re going to have to go bigger. But the ethanol projects are the smaller ones to start with now. Our objective is to really be capturing carbon dioxide from the larger carbon dioxide emitters, like cement plants and natural gas power plants.

By bigger do you mean beyond the borders of Colorado?

We have projects in our pipeline beyond Colorado already. What we are trying to avoid for now are projects that require an interstate pipeline that would have to go long, long distances, and across state borders.

You are based in Colorado, and the state is actually getting a lot of attention where carbon capture and sequestration is concerned. A recent report said it may become the carbon sequestration capital, not just in the US, but in the world. So, what do you see the future of the industry looking like in Colorado, specifically in the near-term?

It certainly does have big opportunities. I think there are other states that we’ve seen and are well-known, certainly within the US, like the Gulf Coast has great geology. Illinois also has great geology, as does Colorado. So for our first project in northeast Colorado, we’ve identified pretty decent sized sequestration sites, but not massive, gigaton sites yet.

We have a great subsurface team of geologists and reservoir engineers that really helped us identify them. And we have a proprietary list of opportunities that we think look pretty exciting for carbon capture and sequestration.

Relevant: Carbon America Sets Out To Tackle The Climate Crisis

We’ve identified opportunities in southeast Colorado that we think are much bigger and closer to some much larger emitters, although those are still works in progress. But we do think Colorado is going to see more carbon capture and sequestration, for sure. And we’re engaging with a lot of the stakeholders now to push forward on our Colorado projects.

You mentioned that you want to go beyond ethanol, as well, and help decarbonize other sectors. Do you have any particular sectors where you have partnerships formed or planned?

I would say we don’t have anything that we’re prepared to announce. But we are actively engaged with both natural gas power plants and cement plants, perhaps also a coal plant.

But cement is particularly interesting, just because we believe that is just one of the hardest industries to abate. That’s a universal understanding that carbon capture and sequestration is likely going to be necessary for cement for quite some time.

Just last week the Biden administration announced a $2.3 billion infrastructure investment, specifically for carbon capture. How do you see that impacting the industry in general?

So I believe that what the Biden administration was referencing, on the investment is really talking about the Infrastructure Investment and Jobs Act that came out. And that’s part of it. In fact, there’s about $12.5 billion dollars, give or take, for carbon capture, sequestration and some hydrogen government funding, and that covers a lot of different areas.

But I think that is where that’s coming from, we’re certainly going to be talking to the DOE and looking for those opportunities as well. Because while we are technology agnostic, as a carbon capture and sequestration company, we do have a technology that we’re super excited about. But we’re not relying on that technology to really address the mission that we’re trying to achieve, which is capturing and sequestering as much CO2 as possible, as quickly as possible.

Do you rely on technology from other companies?

And because it’s about 98-99% carbon dioxide, even as it’s coming up the smokestack, so you capture it, you compress it and get it ready for a pipeline or a gathering system, and take out some of the water and maybe some other trace elements or molecules. So that’s not really a technology.

Carbon America can go to equipment providers, we can get the compression system. But if we’re talking about, say, a cement plant, there are other technologies that are out there that we’re having discussions about using for some of those projects. And in parallel we are also trying to develop our own tech, but as I said, we’re tech-agnostic. These technologies just cost a lot more money and decarbonizing a cement plant or power plant is more expensive, because the CO2 concentration levels are so low.

Does Carbon America plan to take advantage of  this government funding?

I think we’re going to be opportunistic. If we believe we have a project or technology that’s ready – and that’s what they call Funding Opportunity Announcements (FOA) – then we’re certainly going to try to secure that funding. It’s very, very difficult right now for power projects and cement projects to make the economics.

There needs to be either enhanced policy in terms of enhancing the value of the section 45Q tax credits, or we have to get smarter. And we have to get smarter about how we develop projects and move faster and drive costs down. And so being able to secure some DOE funding through FOA, in some cases, the government’s willing to put up to 80% of the capital costs of these opportunities, that would go a long way to help projects work, as the sector really grows.

Capital markets aren’t really ready yet for carbon capture and sequestration. We’re trying to get them there, but it’s going to take some time.

Do you have plans on securing funding elsewhere with bigger partnerships, perhaps with other companies in the industry?

So that’s one area where we’re going to be looking to get funding to help pay for the projects. Another area we’re looking at is securing development capital to augment our equity that we have. So we’re working into that now. And we’re hoping to be able to secure that sometime in the summer.

Relevant: The Acorn Program Can Have A Positive Impact On Farmers – Satelligence CEO Niels Wielaard

We’re in discussions with state-level and other US government agencies like the US Department of Agriculture, because our projects are in agriculture areas within the United States. So we could be eligible for USDA guarantee programs.

And what that does is it really educates the lending market and the capital markets: here’s how a project can get done. We get some state support to be able to get some of the first projects through. And then after that, we’re hopeful that we can wean ourselves off of government support through agencies like the USDA.

Going back to your most recent partnership with the ethanol plants,  has work there already begun?

Yes, it has. We’ve been on it for quite some time, we have been working on identifying the best place to sequester the carbon dioxide and we’re getting close.

We spent a lot of our time and cash on progressing on those sites, so we’re expecting to be able to have our first carbon dioxide injection sometime in 2024. We have spent money and we’re going to be spending quite a bit of money at the end of this year, and then well into next year to advance the project. 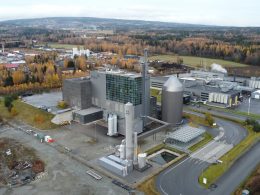